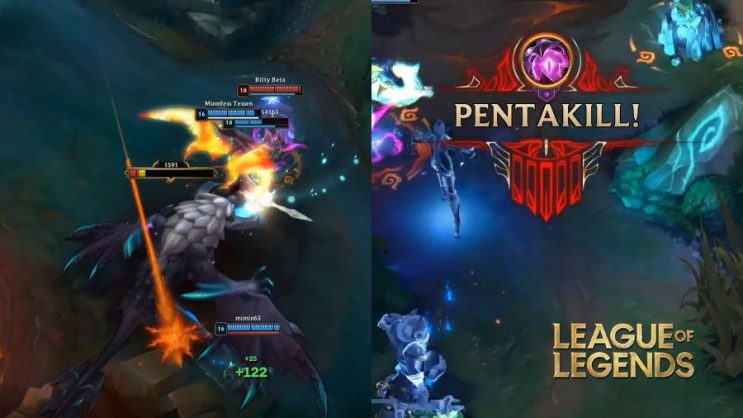 One player provided a short video showing how to really piss off the opposing team in seconds.

League of Legends players surrender matches for a variety of reasons. Often this is because one of the allies is afk or trolling, which effectively reduces the chance of winning. It also happens that voting for the surrender occurs after an unsuccessful action, because the team loses hope of a rebound and jointly thinks that trying to win in the current match does not make any sense.

How was it this time? One of the LoL fans showed a fragment of the game that shows the scenario in which the opponents are clearly shown that they should give up.

READ MORE
xQc learns how AD Sion works in LoL, and probably rather preferred to live without this information

A way for a quick surrender

A user with the nickname MrTurdTastic posted a very short, just 17-second video showing how to make the opposing team from League of Legends think about giving up the game.

At the very beginning of the recording, the blue team tries to kill the Elder Dragon. After a while, you can see that the opposing Master Yi is approaching them. Although he is completely alone and runs into a group of enemies, he manages to steal the Elder Dragon.

Some people probably think that this is what the whole recording is about. Probably the opponents were not satisfied with the fact that they gave the dragon to the other team so easily. It quickly turns out, however, that this is not the main action of the entire video.

As you can see, the whole blue team, probably slightly nervous about the loss of the Elder Dragon, is heading towards the rest of their opponents. The composition of the red team is significantly weakened. As many as 3 people are not alive – Twitch, Akali, and Master Yi, who has just been killed. Only Lissandra and Vel’Koz remained alive, so it is not surprising that the five enemies felt up to date and decided to finish them off and then win the match.

As shown in the video – Vel’Koz perfectly hit the whole team with his E, and then grabbed a pentakill from his ult.

It’s hard to say if the blue team expected this. Rather not, and after losing the dragon and giving the penta to Vel’Koz, it was probably decided that further play was pointless and it was better to give it up as soon as possible.