Developers want to partially connect the League of Legends and the Valorant universes. They add a set to the FPS that includes LoL characters.

It is well known that Valorant and League of Legends are productions that were created by the same studio. As such, it comes as no surprise that developers are sometimes willing to allow themselves to create some kind of link between the two titles. This is the case with the new set that will soon be available in Riot Games’ FPS.

Additionally, one of the skins has a unique and very interesting feature.

READ MORE
The Valorant Mobile beta has just launched. Now all you have to do is wait for the invitations

What is the design that will soon be delivered to Valorant?

In the screenshots below, you can see what the design of the set, which is about to be added to Valorant’s content, will look like. It features the previously mentioned characters from the League of Legends universe and is generally kept in a variety of cheerful colors. 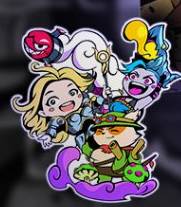 The Phantom skin changing its appearance, however, is more impressive. It undergoes modification when shooting, which is perfectly visible in the attached clip.

All information comes from one of the leakers, “Spideraxe”, who informed about it on his social media. This content is scheduled to be added to the game in a future patch, scheduled for April 13.

The community will surely love this bundle and there will be many players who choose to purchase it. Especially those who are fans of Riot Games creativity and know the LoL characters included.