One of the popular streamers, known mainly for her appearance, created a lot of confusion with her words.

Melina is definitely someone very important to the entire Twitch. People associate her mainly with swimming pools, but also very characteristic poses while sitting, or podcasts on which the subjects of 18+ were discussed.

Melina on Twitch is watched by over 790,000 people. Her content is best described by clips from the last 30 days:

READ MORE
Why was Pokimane banned on Twitch? This is the first ban in the history of the popular streamer

Melina on her Twitter attacked the latest trend, which consists in watching series, movies, TV shows during streams. It is already incredibly popular all over the world. 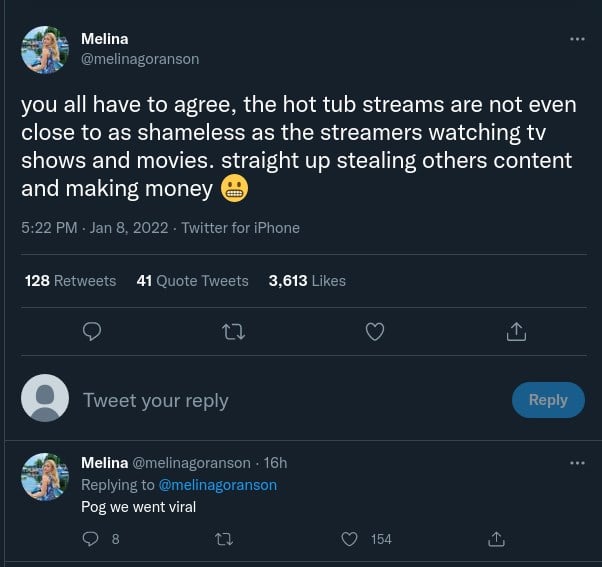 According to the streamer, this is much more harmful than content related to swimming pools or beaches. Mainly because it is stealing someone’s content and earning money on it at the same time. Is it really?

Opinions on this topic are divided. Exactly as in the pools. Many think that if there is something on YT, it can be safely watched – it is a big simplification that may not be true in some time. It was the same until the DMCA violation bans started appearing en masse.