Some time ago, we informed that Twitch would like to introduce a new feature, i.e. sharing the ban list between different users. Now it officially enters, because the platform has revealed all the details.

It works very simply. In the options, you can add other streamers with whom you want to share the ban list. A request to accept is sent to them, and that’s it.

READ MORE
The popular youtuber had an “18+ adventure” during the stream. Until Youtube itself became angry

What will it do?

Note that the feature will not work in such a way that streamer “X” will share bans with “Y” and the person will automatically get banned. The first message will be displayed as suspicious. 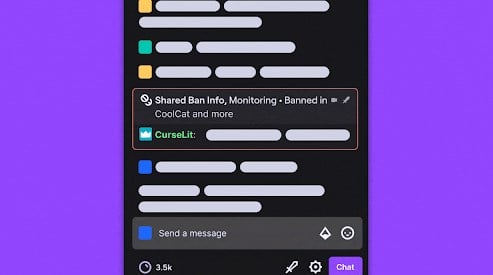 Flagged users’ first chat messages are clearly marked with a red border and include details on which channel they are banned from. Their messages are also queued in the “Suspicious User Activity” Mod View widget for additional visibility.

At the moment, you can share bans with up to 30 other streamers.